We are proposing to recalibrate the bill to make it more relevant and responsive to the needs of businesses negatively affected by the COVID-19 pandemic, and to improve the ability of the Philippines to attract highly desirable investments that will serve the public interest.

The amendments make the proposed bill the first-ever revenue-eroding tax reform package proposed by the Department of Finance (DOF) and the largest fiscal stimulus program for enterprises in the country’s history. The revised bill also increases the ability of the President to approve tax and non-tax incentive packages to attract investments that will benefit the Filipino people.

The CITIRA bill, now the Corporate Recovery and Tax Incentives for Enterprises (CREATE) Act, was certified as urgent by President Duterte on March 9, 2020 and mentioned as a SONA priority this year as well as in previous years.

Below is a summary of the economic team’s proposed amendments to Senate Committee Report No. 50, the current Ways and Means committee report on CITIRA:

Even with these amendments, we maintain that the reform must continue to adhere to the basic principles of a system that is performance-based, targeted, time-bound, and transparent. These principles have been unanimously recognized by stakeholders during hearings and consultations. We believe that these amendments balance the interests of all stakeholders, while remaining faithful to the fundamental principles and mindful of the country’s fiscal challenges.

Why the reform is needed

The Philippines currently imposes the highest CIT rate in the ASEAN region, which is a burden to micro, small, and medium enterprises (MSMEs) that are dealing with the effects of COVID-19. Even before the pandemic, the 30 percent CIT rate hindered local businesses from expanding, growing, and competing with their regional counterparts. 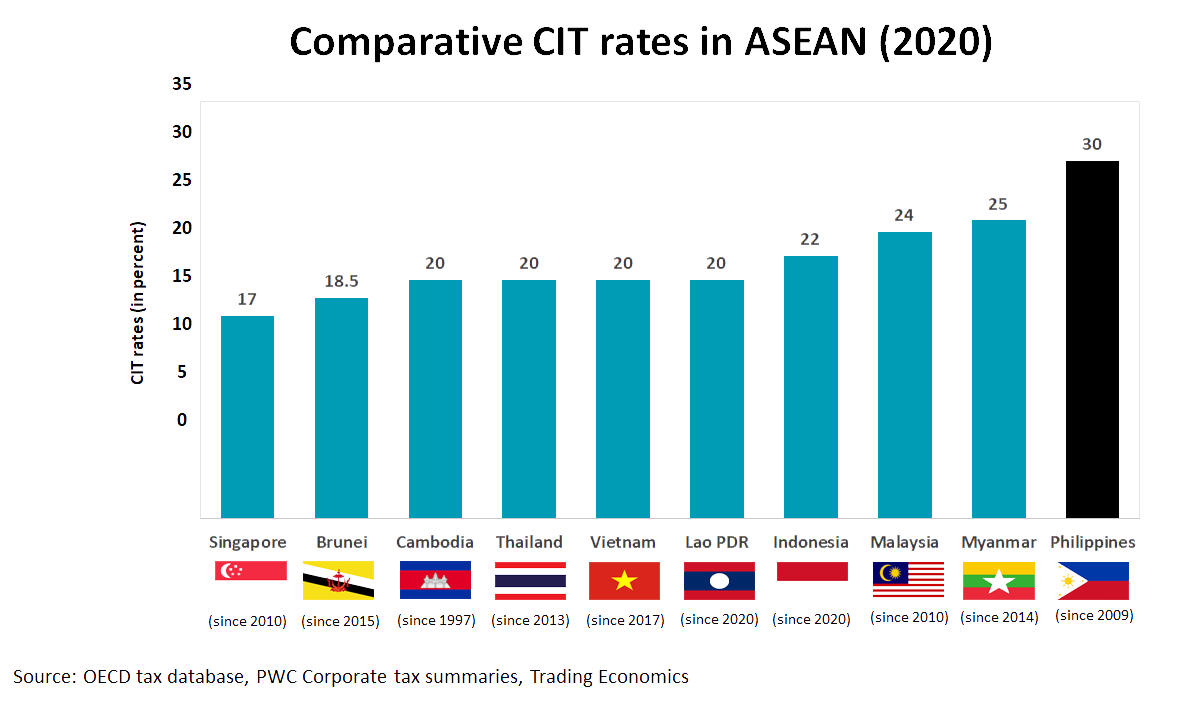 The larger reduction will also bring the country’s CIT rate closer to the ASEAN average of almost 22 percent[1] and will boost cost competitiveness in doing business. A lower CIT rate, combined with the country’s strong demographic and financial fundamentals, will strengthen the country’s case for more and better investments.

For decades, the Philippines has been too generous in granting tax incentives to a few investors, in perpetuity, and without a regular and in-depth review of the costs and benefits of doing so. We give away some of the most, if not the most, generous incentives in the region via a special rate of 5 percent on gross income earned (GIE) that is in lieu of all taxes, both local and national, and with no time limit. 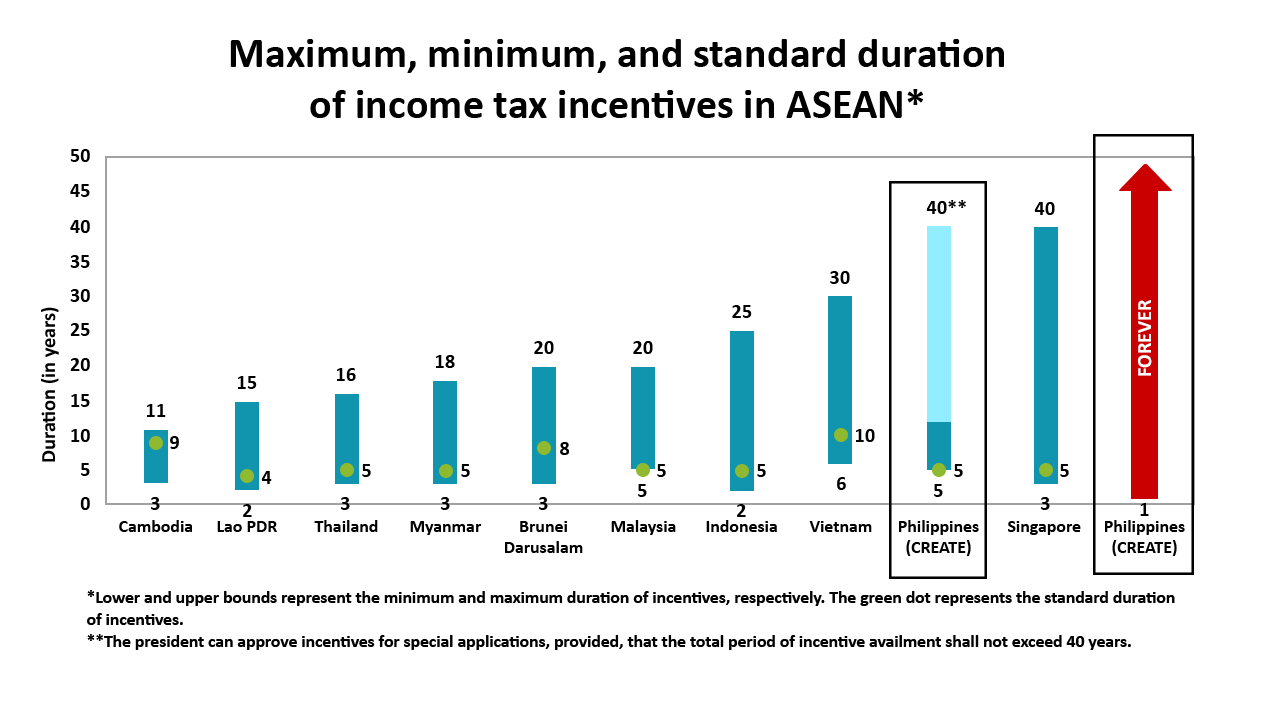 While these companies are subjected to discounted tax rates equivalent to 6 to 13 percent of CIT, most other companies—including around 90,000 small and medium enterprises (SMEs)—pay the regular rate of 30 percent.

In 2017 alone, the Filipino people granted PHP 441 billion (or 2.8 percent of GDP) in tax incentives to only 3,150 companies, including those on the elite list of Top 1,000 corporations. This is just a fifth below the annual budget of the Department of Education (DepEd) and roughly four times larger than that of the Department of Health (DOH) in the same year.

PHP 441 billion of foregone revenues in 2017 could have funded…

In principle, granting incentives is justifiable if the recipients generate a net benefit to society, such as the creation of good jobs, investing in less developed areas, and if incentives are given for a generous but reasonable amount of time — not forever.

Modernizing the fiscal incentive system will allow the government to offer superior incentives that are performance-based, strategically targeted, time-bound, and fully transparent. It will encourage businesses to invest in industries and sectors aligned with the Philippine development agenda; create higher-value jobs; incentivize upskilling and employee training, and promote investments in less-developed areas, and areas recovering from calamities or armed conflict.

CREATE seeks to promote a fair and accountable tax incentives system to make sure that every peso granted as a tax incentive yields a net positive benefit to society.

Under Package 2, incentives will be: 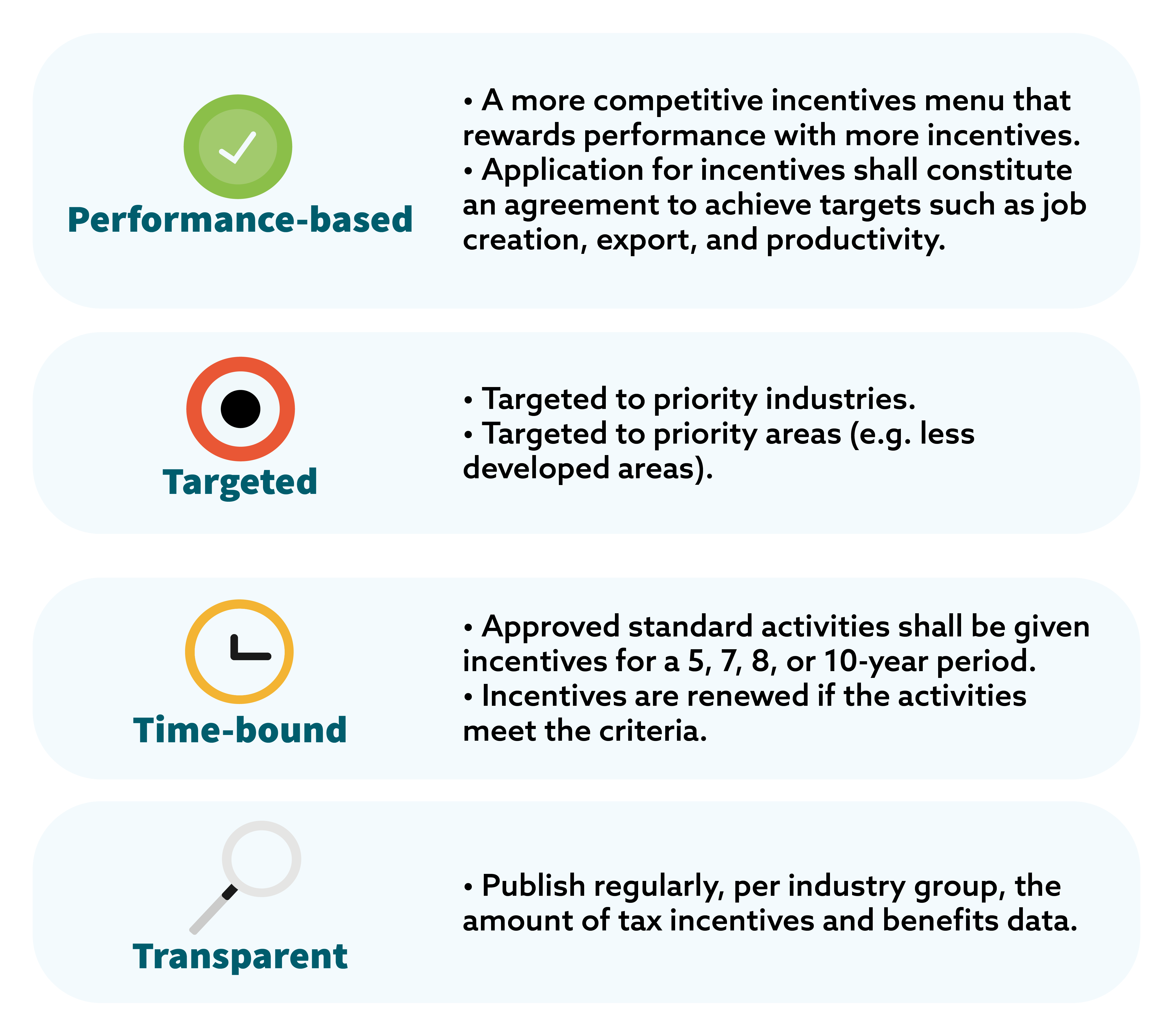