The Tax Reform for Acceleration and Inclusion Act (TRAIN) effectively increases the take-home pay not only of salaried workers earning P250,000 yearly and below but also of those with annual taxable income from P250,000 to a maximum of P2 million.

Finance Secretary Carlos Dominguez III said individuals earning above P250,000 a year but less than P2 million used to shell out about 30 percent to 32 percent of their net taxable income for their personal income tax (PIT) payments. But under the first five years of the TRAIN’s implementation, they would only pay between 20 and 30 percent for the PIT, he said.

The TRAIN also provides tax relief to over six million or 86 percent of compensation earners with a taxable income of P685 per day or P20,833 per month and below as they will be exempted from paying the PIT. The 13th-month pay and other bonuses not exceeding a total of P90,000 are also tax-free under the TRAIN.

Based on BIR database, around 2,038,202 or 29.11 percent of salaried workers are minimum wage earners who are already exempted from the PIT even before TRAIN, while 3,987,509 or 56.96 percent are new beneficiaries of the TRAIN’s zero-tax provision.

Thus, under the old tax schedule, if you are an individual taxpayer with no dependents and who earn a little above P500,000 a year, more than one fourth of your annual income will go to paying the PIT, which is unfair because you get lumped in a tax bracket, which also includes very high-income earners.

But under TRAIN, the brackets were adjusted so that middle to upper-middle-income taxpayers would get to enjoy higher take-home pay by paying lower tax rates. 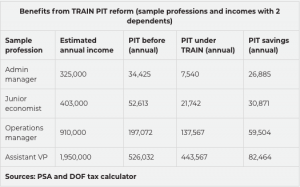 From 2023 onwards, the PIT rates of individuals will further be adjusted downwards so that those earning above P250,000 but not more than P2 million would pay only between 15 percent and 25 percent in income tax.

Even if one adds the impact of the other TRAIN provisions on expanding the value-added tax base, the increase in fuel excise tax and tobacco excise tax, the imposition of a tax on sugar-sweetened beverages (SSB), and the overall inflationary effect, a household earning, for instance, a combined monthly income of around P95,000 a month, would still get a net aggregate take-home-pay hike of P7,139 a month.

As an example, a family of 4, with the father working as an administration manager who earnsP25,000 a month and the mother who works as an operations manager and receives a monthly pay of P70,000, will effectively be able to save P8,532 per month under the lower PIT of TRAIN.

Even with the effects of the VAT, oil excise, automobile excise, the SSB tax and overall inflation on their household budget, which the Department of Finance estimates would amount to about P1,393 a month, this family with a working couple will be able to save around P7,139 of their TRAIN-effected pay increase.

Dominguez said 99 percent of the country’s individual taxpayers would benefit from TRAIN owing to hefty cuts in the PIT rates.

Dominguez said the TRAIN marked the first time that the government had pushed a tax reform package, not in response to a financial crisis or an​ external conditions imposed by other institutions, but to ​instead ​strengthen its ​programs meant ​to ​attack​ poverty and correct income inequality.

It was also the first time ever that the government, through the initiative of President Duterte, has lowered PIT rates to make income taxation more equitable and fair, most especially for low-income Filipinos, he said.

The finance chief said the TRAIN, which will help fulfill President Duterte’s “promise of real positive change,” provides the government with a robust revenue stream for programs in support of the administration’s agenda to achieve high inclusive growth by modernizing the nation’s infrastructure backbone, upgrading public services and improving living standards.

More than 1,000 entrepreneurs, mostly representing small and medium enterprises (SMEs), were consulted by the … END_OF_DOCUMENT_TOKEN_TO_BE_REPLACED