“There is no way we will stop fighting for fiscal incentive reform,” Department of Finance (DOF) Undersecretary and its Chief Economist Gil Beltran has said, in response to the spate of strongly worded statements made by Philippine Economic Zone Authority (PEZA) Director-General Charito Plaza against the Corporate Income Tax and Incentives Reform Act(CITIRA), which was approved last September 13 by the House of Representatives.

“Director-General Plaza said they are ready for war, but we would at least expect them to be armed with correct information,” Beltran said, adding that the statements made by the investment promotion agency (IPA) have been “largely erroneous and misleading.”

“We are not against incentives, and we are not trying to remove PEZA,” Beltran emphasized. “We are simply trying to fix a long-broken system. When the government grants incentives, we want to do so for the right reasons–such as for job creation, investment in less-developed areas, and investment in infrastructure.” 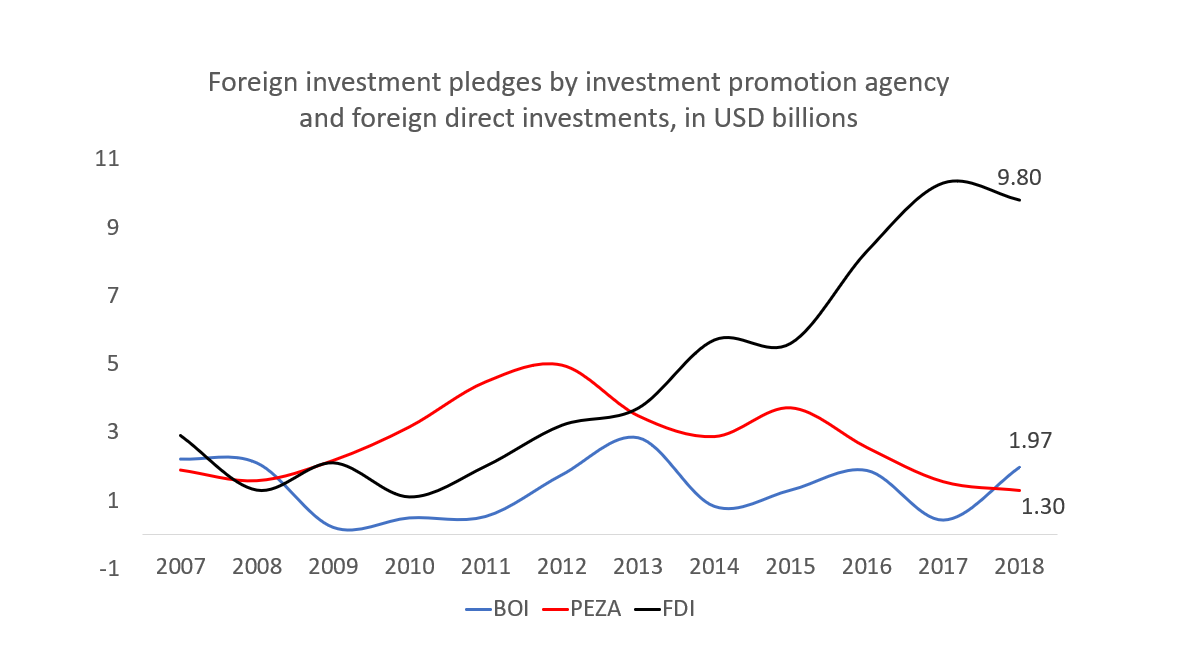 In a recent press briefing, Plaza reiterated her desire for PEZA to be exempted from the incentive scheme proposed under Package 2 of the comprehensive tax reform program (CTRP), which the House approved as House Bill (HB) No. 4157.

In response to claims that CITIRA might drive away potential investments, Beltran said, “We have to look at the bigger picture. Foreign direct investments (FDIs) have been on an upward trend since 2011. There is no doubt about that.”

“Looking at the data, we will even find that these FDIs are increasingly non-reliant on incentives. While more and more investments are coming into the country, the level of investment pledges through PEZA, which are pledges made with the expectation that incentives will be granted, have been going down,” Beltran said.
“Since our fundamentals are in place, incentives are becoming less and less of a factor for investment. Even before CITIRA or TRABAHO (Tax Reform for Attracting Better and High Quality Opportunities) was proposed, PEZA investment pledges have been going down,” he added.

“Furthermore, it seems that investors lately do not base their pledges on incentives given forever. In 2018, the largest amount of investment pledges came from firms registered with the Board of Investments (BOI), which does not grant incentives forever. Investment pledges with the BOI in 2018 amounted to $1.97 billion. Those with PEZA only amounted to $1.3 billion,” he added.

“Furthermore, it seems that investors lately do not base their pledges on incentives given forever. In 2018, the largest amount of investment pledges came from firms registered with the Board of Investments (BOI), which does not grant incentives forever. Investment pledges with the BOI in 2018 amounted to $1.97 billion. Those with PEZA only amounted to $1.3 billion,” he added.

Previously, the DOF debunked Plaza’s claim that PEZA generated over P10 trillion in contributions to the economy from 2015 to 2017.

The method in calculating PEZA’s total contributions that Plaza used added items from both expenditures and income, which resulted in double-counting.

Beltran further explained that, when contrasted with the fact that PEZA has given away the lion’s share of incentives over the past few years, the IPA’s contributions to the economy are not as grand as portrayed.

“An estimated P5.5 trillion in tax incentives was given to PEZA firms since 1995, while, in return, investment pledges with PEZA over that period amounted to only P3.6 trillion. This means that PEZA gave out more than it got back in promises of investments in the economy. And note that this amount constitutes promises only. Is this not a signal that we have to look more closely at our incentive system and account for the money we give out? That is what CITIRA seeks to do.”

Calculations on approved investments are based on official data from the Philippine Statistics Authority (PSA), while the amount of tax incentives granted before 2011 was estimated using a linear trend with available data from 1999, 2004, and 2011 onwards. The 1999 data is based on a World Bank study and the 2004 data is based on a study by Professor Renato Reside of the UP School of Economics.

He further said that Plaza’s claim that Package 2 of the CTRP would hinder the development of small and medium enterprises (SMEs) is unfounded. “This is simply not true because most incentive recipients are large or foreign firms,” he said.

“Package 2 will actually help more than 989,000 micro, small, and medium enterprises (MSMEs) by gradually lowering the corporate income tax (CIT) rate from 30 to 20 percent, thereby decreasing their tax burden. Only 3,150 firms received tax perks, which all in all amounted to P441 billion, or 3.2 percent of gross domestic product (GDP), in 2017.”

“In addition, Package 2 will actually help spur development across the Philippines,” Beltran said.

Under the current CITIRA proposal, the period of incentives to be granted will be tiered, depending on where firms locate.

For example, he said, the amount of time that deserving companies may enjoy the income tax holiday and then the special CIT rate will be up to 5 years if the enterprise locates in the National Capital Region, up to 7 years if it locates in Laguna, Bulacan, Cavite, or Rizal, and up to 10 years if it locates elsewhere in the country.

CITIRA seeks to reform the country’s fiscal incentive system to ensure that it is performance-based, time-bound, targeted, and transparent. Under the proposed regime, incentives will be granted to firms whose activities yield a net benefit to the Philippines.

Earlier this month, Trade Secretary and PEZA Board Chairman Ramon Lopez clarified that Plaza had acted without approval of the PEZA Board, which is its governing authority, when she pushed for amendments to the PEZA charter in direct contravention of the CIT and incentives reform proposal approved by the Duterte Cabinet.

“We have one tax reform in this government,” said Lopez, referring to CITIRA. “Plaza filed (the proposed amendments to the PEZA charter). It was the director-general who filed it, not the PEZA Board. I’m the chairman of the PEZA Board. The proposal failed to reach my desk. That is not the official PEZA (position), and I was bypassed.”

In addition to Beltran’s response, DOF Undersecretary Karl Chua also defended the DOF’s position against one other claim of Plaza that neither PEZA nor its locators were consulted in the crafting of Package 2 or CITIRA.

Chua revealed that several consultations were actually held with PEZA and other stakeholders.

“On February 12, 2018, our team also presented Package 2 during the PEZA board meeting at their office,” Chua said. “During the meeting, Director-General Plaza even agreed to the principles of Package 2—that incentives be performance-based, targeted, time bound and transparent. We are puzzled as to why she changed her mind and is now opposing this tax reform bill that aims to benefit SMEs, and modernize our incentive system so that we give even better incentives for the right reasons and for the right investments.”

After the Tax Reform for Acceleration and Inclusion Act (TRAIN) was enacted into law in December 2017, the DOF submitted the proposed second package of the CTRP to the Congress.

The President approved it in a Cabinet meeting on Jan. 8, 2018, and Chua disclosed that Plaza met with DOF Secretary Carlos Dominguez III that same month to discuss the bill.

President Duterte then reiterated during his 4th State-of-the-Nation Address (SONA) last July that Package 2, along with the other remaining packages of the CTRP, should be passed by the Congress soon. He said the bill would benefit micro, small and medium enterprises(MSMEs).

Chua said, “As members of the administration’s economic team, we should not stand in the way of a priority economic reform that has been endorsed by the President no less.”

No taxes, no infra →

A pleasant evening to all of you: It is truly a pleasure to spend this … END_OF_DOCUMENT_TOKEN_TO_BE_REPLACED